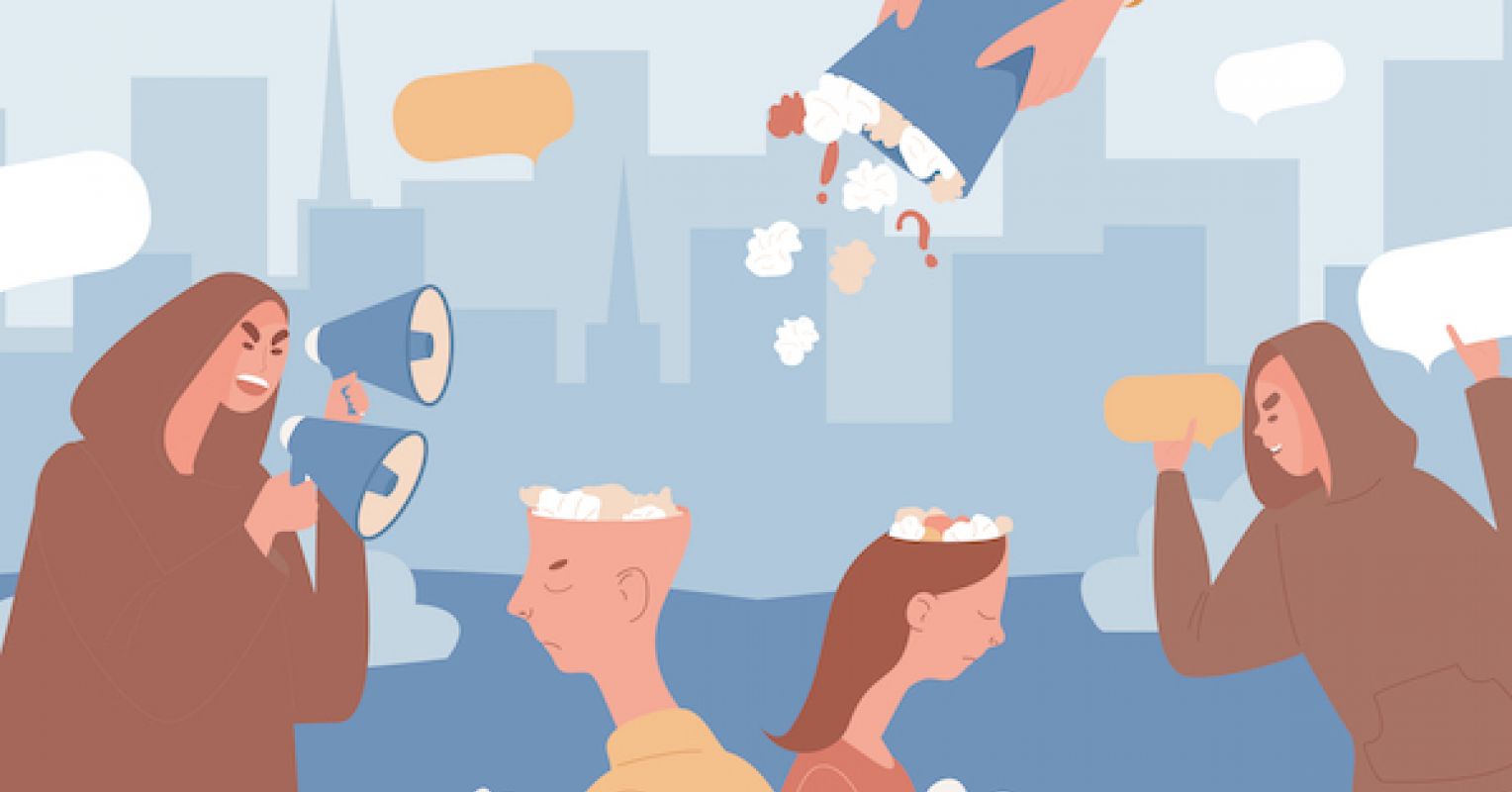 I have a friend who is losing his marriage because he is obsessed with misinformation. He and his wife have always had differing views on politics, but their yin and yang attitude has long been endearing: intellectual stimulation and fodder for respectful, playful arguments like Scalia and RBG. But in this new world we live in, things have changed dramatically.

Noel T. Brewer is a professor of public health at the University of North Caroline (UNC) at Chapel Hill who specializes in studying why some people choose or refuse vaccination. Even after two decades of research on the subject, today’s environment still shocks him. “Some people,” he told me, “have used misinformation to make their love affair a defining personality trait.”

Alice (my friend’s wife) was already prone to anxiety and was hit hard by the pandemic. As a homemaker with a bevy of young children, she has had a lot to deal with during the COVID lockdowns and the kids’ distance education. There were limited social opportunities.

In a gaping void created by the loss of normal school, sports, and dating dynamics, Alice’s “community” began to revolve around social media and online committees pushing fringe theories. When two children in the family became eligible for the COVID-19 vaccine, a bitter argument ensued and they ended up not being vaccinated.

And then Alice got sick. Over two weeks, her symptoms progressed – and Alice refused to be tested. Not once, not even before starting ivermectin doses better suited for a large livestock. Not even before she visits her parents with the children, who are also vaccine skeptics.

When he began his career at UNC, Brewer singled out two health behaviors for scrutiny that appeared to require complex decisions: vaccination and disease screening. He has since discovered that vaccinations are driven by many environmental factors and are actually often “not a choice in the usual sense of the word”. History, culture, and fear all play a role in whether or not a community is likely to accept a vaccine. What seems new these days, he says, is the extent to which misinformation about vaccines has become a cult-like obsession.

Here we see that misinformation, addiction, and cults all seem to have something in common – a person’s “vulnerability factors” can make them more susceptible to falling prey to lure. And in both addictions and cults, those with a history of anxiety or depression are at higher risk.

Cult experts call the first step in cult attachment narcissistic seduction. [1] The ego and its vulnerabilities are exploited through flattery and groupthink. Many new cult members seek refuge from addictions to other things or from negative family dynamics and find that their new cult environment offers psychological relief, at least initially.

This “honeymoon” can last for days, months or years. [2] During this time, the cult recruit is gradually pulled out of his past life. In a study of 31 former cult members, researchers found that the impact of cult membership affected the full breadth of life, “be it social, family, marital, professional, or financial. No part of her [prior] life was spared.” [3]

The study also describes the type of people drawn to the narcissistic seduction of cults, and they sound a lot like Alice — most of the cult victims in the study were well educated, had long-term partners, and had a history of anxiety. The aftermath of being in a cult seen in the study also reminds me of what happened to Alice. Well over 50 percent of cult members report a reduction in social life and 45 percent experience “isolation with family and/or spouse”.

Our COVID era of uncertainty and isolation just doesn’t seem to be ending. Rates of anxiety, depression and substance abuse have skyrocketed. It’s no surprise, then, that some sort of cult mentality could serve as a psychological security blanket for many — as it did for Alice. She has a community of like-minded people cheering her on as she battles with her family and community over masks, vaccines and whether COVID even exists. Not even her own mother’s illness could deter Alice – when she heard she was ill, she jumped in the car to deliver ivermectin.

My friend was completely at a loss as to what to do. “If it was alcohol or drugs, I could take it and we could work out a solution together,” he told me. But unlike a substance abuse problem, there was no intervention or program that Alice could turn to; no 12 steps or misinformation Anonymous. It’s really strange that despite centuries of misinformation in various forms and sizes (state-sponsored propaganda, false prophets, and Mad Men-style manipulative advertising), and despite the fact that being deceived is an almost universal human experience, very much gives little guidance on treating this scourge.

What can be done about the obsession with misinformation?

How can we help Alice and her family? If you consider her situation as comparable to an addiction, the question arises: Is it treatable? As?

Well – spoilers here – the cure won’t be easy. That being said, and along the lines of programs designed to treat other types of addictions, there are several options to consider:

The idea here is to share scary information to change behavior. Every parent knows this technique: “Junior, if you put your hand in the cage, the Gila monster will bite your finger off.” In Alice’s case, the fear communication could be about what Alice has to lose – her marriage, hers children and their family’s health.

The problem is, as we know, fear often fades quickly. While such communication might trigger a moment of realization for Alice, it doesn’t mean that realization will actually happen. And unfortunately, with other addictions and related behaviors — like drug and alcohol use and driving — it has been shown that communicating fear does not produce lasting changes. Coming back to COVID situations, Dr. Brewer: “Fear communication does not increase vaccine uptake” and is “unlikely to do any better at breaking people’s addiction to misinformation.”

Much like an alcoholic who gives up the sauce and instead becomes addicted to fitness, here might be an opportunity to trade one obsession for another. “It may be unrealistic to treat ‘misinformation addiction’ in the usual sense,” says Dr. brewers “Instead, we could encourage people to turn their attention to a new, minor ‘addiction,’ like baking sourdough bread, fantasy soccer, or Pokémon Go.”

Unfortunately for Alice, her “other” obsession was wellness (fitness, natural foods, and mindfulness)—and these days, these areas are often gateways for misinformation as well. Fantasy Football and Pokémon Go shouldn’t change that.

One of the ways out of addiction is bottoming out. The weekend scam that leads to the purchase of a pet Gila monster followed by the Chevy collapsing in a ditch can be a transformative, demon-cleansing moment – if it doesn’t land the addict in the hospital or worse. At best, this is an organic moment — one that brings the risks into focus and motivates the addict to keep going.

The most common reason cult members leave a cult (and remember that the average cult member will spend 9 years under the spell) is because they lose faith in the group’s creeds. The trigger for this “crisis of faith” is often a family or social intervention.

Here was my friend. He planned an intervention. A fairly simple one, actually: a part-time job—something that could get Alice out of the house and expose her to new, real, face-to-face, real-time social interactions. Employment, he thought, might pull Alice out of the vacuum of exponential misinformation.

He was making headway with this idea when Alice’s crisis hit. His brother, who had also rushed to his mother’s aid when she was ill with (unspoken) COVID, became ill himself. Unvaccinated and in denial, the brother went to bed early one night to get a good night’s sleep. He was found lifeless the next morning.

I see addicts in the ER all the time. There is no answer that will help them. They’ve walked many paths to get hooked, and when they find a path, it’s never exactly the same as someone else’s. But there are roadmaps that have worked for others, directions that can be tried — at least for drugs and alcohol.

If misinformation is addictive in a sense – and I believe it is – then Alice and our nation need lifelines indeed. The sooner we admit that there is a (slightly) new, dangerous, addictive substance out there that takes up the same neurotransmitters that fuel substance abuse, gambling, and cult membership, and eat up our neighbors and loved ones… the sooner we call it – disinformation coercion – the sooner we’ll be able to find Alice and the countless others whose lives and families are being destroyed by a faceless, insidious threat.

Despite everything, Alice hasn’t yet had to recognize or let go of her compulsion, as I heard last. But she had agreed to apply for a job. Perhaps this is step 1 in your 12 steps to freedom from misinformation.