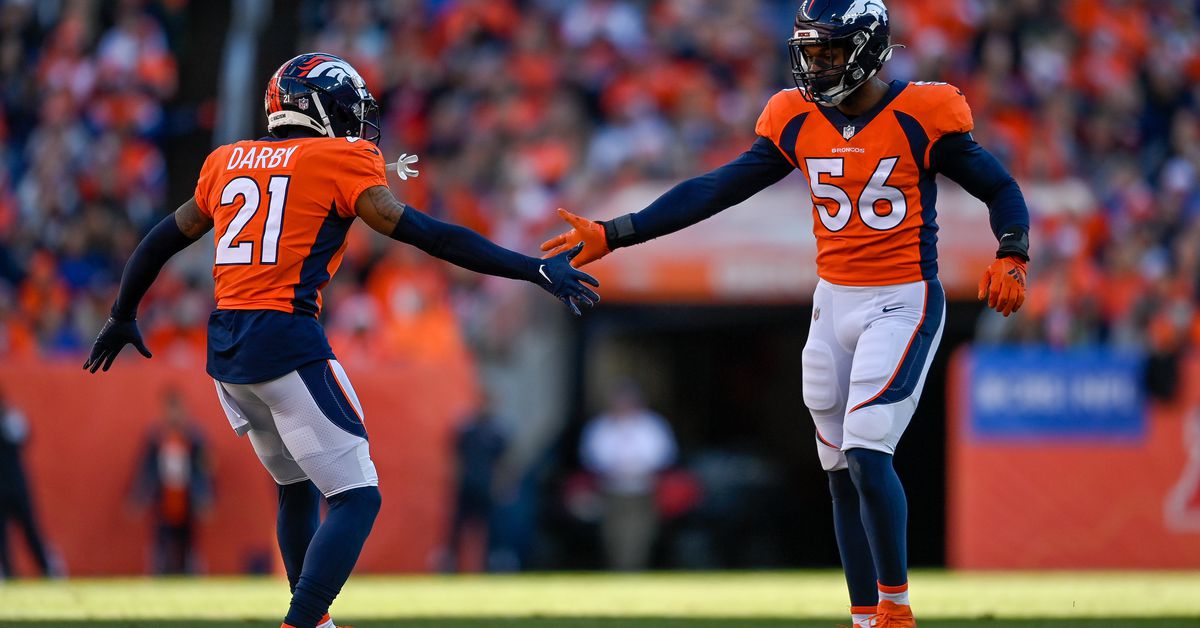 Where’s the biggest hole in the squad… now?

*Editor’s note: Just before this is written, the Broncos signed RT Billy Turner to a one-year deal, which to some extent obscures the question. But the debate is fun, so now we can decide if the three guys fighting for proper tackle – Tom Compton, Calvin Anderson and Turner – will do. And also whether another cornerback is necessary?

Steve Atwater was holding court at Broncos Country Tonight at KOA Studios earlier this week, and while the topic was highly relevant — is a right tackle or another cornerback more important for the Broncos right now — it deserves more entertaining, largely because of Atwater’s highly entertaining but Almost entirely irrelevant legal jargon jumble:

“I have full jurisprudence…no charges will be brought today…I will not charge you with any misdemeanor…we will have no binding precedents here…” Pure gold.

But when it came to listening to the arguments, Atwater proved a fair judge.

The Broncos had just signed K’Waun Williams, a slot corner from the Niners earlier in the day, so Allbright claimed he was arguing “from a deficit” but was so strongly convinced the Broncos needed more corners that he was willing to stick to his argument.

“The Broncos are still lacking in bodies — even at K’Waun Williams. They’ve got five, need six corners,” Allbright said, claiming that Michael Ojemudia and Essang Bassey could play the position but “are not necessarily guys you want in a division with Davante Adams. You’re not allowed to have underperforming corners that are really special team guys.”

Allbright then backed up his argument by attempting to argue against a proper tackle.

“Oh btw, Russell Wilson… 15th least time to pitch last year. Teddy Bridgewater, the sixth most thrown, and that was with Bobbie Massie,” Allbright added, noting that Tom Compton, the Broncos’ new offensive tackle, had the second-best running score and the same passing score as Massie last year, according to Pro Football Focus .

“Wilson buys time with his legs. He doesn’t need elite right tackle, he just needs someone who is competent, resp Compton.”

Ryan Edwards calls for an upgrade at Right Tackle*:

Edwards started his reasoning by noting that when you look at the Broncos’ roster right now (pre-Billy Turner), the biggest hole is easily right tackle — especially since the Broncos just added a corner.

“Russell Wilson came here in part because he was unhappy with the way they were addressing the offensive line problems in Seattle. And now you’re going to come here and say, “We don’t care that much about the offensive line. We think the left side is good; We will find out things in the center.’ Stop it.”

But Edwards’ main point is that now that the Broncos have an elite QB — one who left his former team in part because he was unhappy with the offensive line — protecting that QB is Job No. 1 .

“The point is that Russell Wilson came here in part because he was unhappy with the way they were addressing the offensive line problems in Seattle,” Edwards said. “And now you’re going to come here and say, ‘We don’t care that much about the offensive line. We think the left side is good; We will find out things in the center.’ Stop it. That’s not good enough at the moment.”

Edwards also requested that a recent comment by George Paton be “in evidence” noting that it would be a strong “tackle draft” and that the Broncos “need to fill that void.”

For Edwards, that gap also needs to be filled on the free hand to protect a quarterback who will face Maxx Crosby, Chandler Jones, Joey Bosa, Khalil Mack, Frank Clark…each twice each season.

“The fact is, what they currently have on the list doesn’t fill that gap,” Edwards claimed. “You’re talking about a division that has some of the best pass rushers in the NFL. Every single team is absolutely loaded. …You can’t start the season with a weakness on the right offensive side.”

Billy Turner will be in contention with Calvin Anderson and Tom Compton for the first RT job but he has the upper hand as his contract may reach $5 million. https://t.co/0JysjZ1ZPD

And the verdict is…

So now you can weigh whether Turner and Williams fill the OT and CB spots well enough that the Broncos’ greatest need shifts to a new position.

Or maybe they could do well to add even more corner and O-line depth.

With both CB and RT being approached with new players this week, do you think these players will suffice? Which position deserves the most attention NOW?

Broncos cement their proper tackle competition by signing veteran Billy Turner to 1-year deal – The Athletic
Turner will compete with Calvin Anderson and Tom Compton but should be considered the front runner to start with proper tackle.

Broncos offensive line around Russell Wilson is closing in, but questions linger – The Athletic
Will Lloyd Cushenberry keep his starting spot in the middle? Will Quinn Meinerz crack the top 5? Who will be the right tackle?

CB K’Waun Williams comes to Denver with Super Bowl expectations and brings the Broncos more than coverage skills
Williams is more than a player who can apply tight coverage and execute instinctive, athletic interceptions. He is also a threat behind the line of scrimmage.

‘Supporting the starter, it goes without saying for me’: Josh Johnson, who will be fighting for the role of reserve quarterback, describes the keys to the critical position
“If your teammates do well and the team wins, we all win,” Johnson said. “That’s what we’re in this building for. That is the common goal. Everyone wants to win.”

Mile High Morning: Where Broncos’ addition of Russell Wilson counts among offseason QB moves
The Broncos changed their season outlook when they made a blockbuster trade for quarterback Russell Wilson, but how much did the deal mess things up?

NFL Power Rankings: Chiefs fall after Tyreek Hill trade; Bucs, Broncos up 15 spots
What is the league pecking order after the free hand opening wave? Dan Hanzus updates his NFL Power Rankings with changes to #1 and #32, plus LOTS of movement in between.

Tyreek Hill is excited to be heading to Miami where he anticipates “a fun season”.
Former Chiefs wide receiver Tyreek Hill made his first podium appearance as Dolphin on Thursday. He told reporters his choice of destination is always Miami “no matter what,” where he feels at home and believes the Dolphins are committed