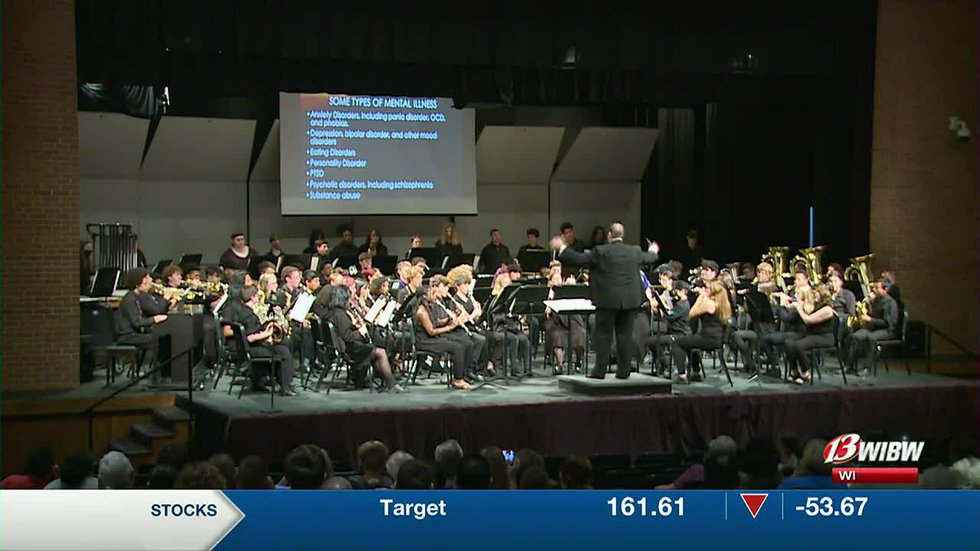 The band premiered a track titled “(not) Alone” to mark May as Mental Health Awareness Month.

“It’s a way for us to be open about it and not be afraid to say ‘I need help,'” said Barry Evans, band director of Topeka West.

As part of the program, Evans created a slideshow of people who have had or are currently dealing with mental health issues to reinforce the message that no one is alone. The Family Service and Guidance Center was also on hand to offer resources for mental health support.

Standridge, who lives in Arkansas, originally wrote a more complex play entitled (un)Broken, which he dedicated to his parents. His mother, who suffered a psychotic breakdown as a child. Standridge himself has discussed dealing with anxiety and depression.

“I hope this work will provide a starting point for productive discussions and will be another tool to help break down the social barriers that prevent those who need help from seeking it,” said Standridge.

Standridge followed (not) solely because of the need to start discussions among young people.

“Those of us who teach or have taught middle and high schools know the need to address this problem at a younger age and provide such tools to middle school and high school ensemble development,” Standridge wrote in the Program Notes .

Standridge reached out to schools to get bands involved in the project and expected a few dozen to respond. Instead, more than 300 schools contributed to his consortium and premiered the play this month.

The French junior high school performed it at their Monday concert, and the combined symphonic band and wind ensemble of Topeka West did the same at Wednesday’s event.

Band president George Rodriguez said he was proud of the performance.

“It was really inspiring because we were raising awareness about mental health and mental health challenges,” he said. “It was just something very special for me.”

“We want to show the students and the audience that they are NOT ALONE with mental health problems,” he said. “We hope this will encourage students and viewers to overcome stigma and social barriers associated with mental illness.”

Find out more about the unbroken project