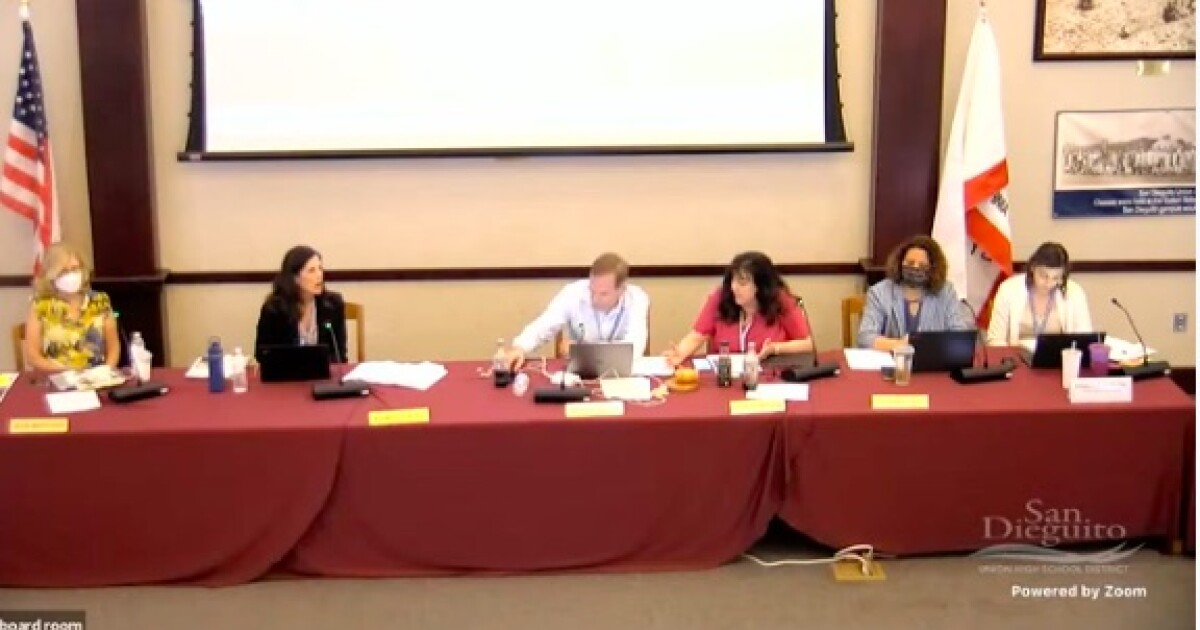 The San Dieguito Union High School District Board of Directors was at odds over expanding its partnership with Kaplan Educational Group, which this year is offering free college and careers support services to students to complement the district’s existing offerings.

At the June 23 meeting, the Board was spilled both philosophically and physically – during the discussion, SDUHSD Trustees Julie Bronstein and Katrina Young left the table in frustration, forcing a break at around 10pm, about six hours into the meeting at this one Afternoon.

SDUHSD President Mo Muir has frequently stated that her priority on the school board is to ensure that all San Dieguito students attend college. She pursued the partnership with Kaplan that year and wanted to build on it over the next year after hearing from parents whose disappointed children weren’t getting into their college of choice, particularly in the University of California (UC) system.

“To me, that’s unacceptable,” Muir said. “We want our children here if they want to go there.”

“This is just not the same process that board members, teachers, staff or parents have gone through,” Kaplan said of the dramatic difference in college acceptance rates since graduating from high school in 2005.

All but one of the UC campuses are now rejecting more students than they accept, with acceptance rates close to those of Stanford or Harvard. That year, UCLA had a 10% acceptance rate, Berkeley had 14.5%, and UCSD had 34.3%.

Kaplan said the process has become a frustrating challenge for many well-qualified applicants. With acceptance rates being what they are, students need to have a plan to differentiate themselves, engage in experiences that will help them grow as students and increase their chances of admission and finding a school that is good for them fits.

This year his free workshops have been viewed by 963 seniors and so far have had 950 views from juniors, Class of 2023.

SDUHSD Vice President Michael Allman said he is impressed with what Kaplan can do and is interested in expanding the service to all children in the district who want to go to college. He demanded that they put a contract back on the board’s agenda in July.

Trustee Bronstein said while grateful for Kaplan’s help, she does not support going in that direction.

“I don’t think it’s appropriate that we spend taxpayers’ money to pay for private sector services that are already being provided by our consultants. If anything, we should improve on what we already offer,” said Bronstein, who campaigned for the district to add an additional advisor to each high school in the 2022-23 budget.

Muir said she wants to strategize the district’s college prep program — she said her advisors are doing a great job, but they have many other roles, more than just college admissions.

“It’s too much for the parent and the kid, it’s very stressful and the only thing that relieves stress is if you’re prepared,” Muir said. “Is it bad to support our students more? How can that be bad? I think we have to do everything we can.”

In her comments, Trustee Young thanked Kaplan for their generous support, but expressed concerns about formally partnering with them and presenting and elevating their work above that of the district’s own advisory staff.

“I think this would mean privatizing our public school system, outsourcing positions that we already have without fully understanding what we’re trying to achieve,” she said, noting that the district has students who are succeeding in different avenues go: to prestigious universities such as Harvard, Yale, MIT, Oxford and West Point; enter the world of work; Take gap years and choose the community college path.

Like Bronstein, Young said she wants to focus attention and resources on the internal counseling staff and develop the best ways to support all students, such as: B. Adding college prep workshops in languages ​​like Spanish and Mandarin.

Bronstein said she’s just as passionate about helping students have college or trade opportunities and asked to give a presentation on a future agenda from the district’s college and career readiness advisors. SDUHSD Deputy Superintendent Mark Miller said it was possible on the August agenda.

Muir still wanted board feedback on what they planned to do with the Kaplan program – whether there was any board interest in keeping the free offerings or considering adding more.

“I think it’s not productive to talk about it anymore,” Allman said. “I’m hearing: we have consultants, that’s their job, don’t evaluate another program, assume it’s the best, don’t look at outside options, don’t look at other programs, keep the money in – A house.”

“We didn’t say not to rate her, Mike,” Bronstein replied. “We are a public school and we should not outsource one of our most important services, which is the counseling of our students. It is important that we expand and maybe even improve on what we already offer.”

Allman then asked Young if she would be interested in seeing a proposal from Kaplan.

“Unfortunately, when it comes to money, no,” Young said. “I appreciate all the volunteer work they’ve done for us.”

“This is a perfect example of why this November is going to be very important,” Allman said. “If we got board members who weren’t so adamant, ‘No, when it comes to spending money outside, we won’t do it.’ I think this is a mistake. We must put the students first.”

At this point, Young asked for a break to allow the board to calm down, and accused Allman and Muir of putting things together that she said were not true. When the break wasn’t granted, she declared that she would take one and left the table, followed by Bronstein.

Allman wanted to push the agenda further, but since they only had two board members, they were without a quorum. Muir then called for a five-minute break, and when they returned, they drifted off topic.

That night the board also split 2-2, without making a decision, on a resolution regarding the selection of the county trustee card and hiring an independent facilitator to conduct a board leadership workshop.

While Allman and Muir were willing to move forward with a facilitator for a governance workshop, Young and Bronstein said they would rather wait until the fall after the election when they have a general assembly. There are three seats up for election in November.