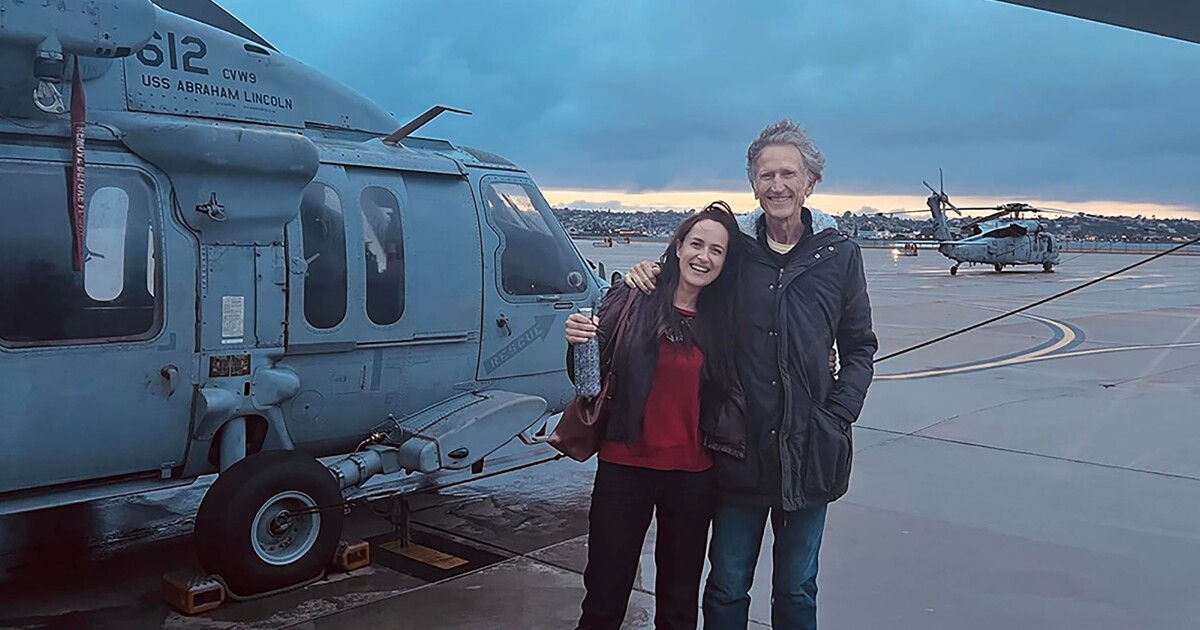 Throughout his adult life, Patrick Mitchell has had a distant goal: to live past 100.

The retired educator from Chula Vista High and Francis Parker knew it was ambitious, but he took steps he thought could help him achieve it — daily exercise, vitamins, healthy eating.

About a year ago, at the age of 72, his hopes of living to be a centenarian were dashed when he was diagnosed with stage IV pancreatic cancer.

At the end of last year, his health began to deteriorate rapidly. His daughter, Vanessa Mitchell-Delmotte, knew he wanted to squeeze more life into his final months, so she posted to a Facebook group asking for bucket list ideas in Coronado.

“My dad loves adventures,” she said, explaining that she wanted to help him have as many as possible. The onslaught of strangers turned out to be huge and made the last few months really adventurous. Her father died at home in Coronado on January 11 surrounded by his family.

In November, she wrote in Coronado Happenings, “My dear father has stage 4 pancreatic cancer. I am taking December off work to enjoy some bucket list activities with him. Anyone have any ideas?”

Within minutes, suggestions from strangers piled up. But what stunned Mitchell-Delmotte the most, she said, were comments from people offering to take their father personally on an unforgettable experience.

One was offering tickets to a special screening of The Nutcracker, while another was offering an equine therapy session at a ranch. Others offered private surfing lessons, a family photo shoot, piano lessons, a painting session at an art gallery, and a stay at a hotel.

“I just scrolled and scrolled. I was so blown away by the generosity of people,” said Mitchell-Delmotte, 38.

Julie Wright was one of the generous strangers. She and her husband, Justin Wright, a search and rescue swimmer, offered to give them a private tour of a Navy helicopter squadron.

“Dad’s father was in the Navy, and I knew he had an affinity for anything Navy-related,” Mitchell-Delmotte said.

On December 9th, she and her father went to North Island, where they received a private tour of the helicopter hangar and an in-depth demonstration of the extensive fleet of aircraft there.

While the experience was meant primarily for Mitchell-Delmotte and her father, for the Wrights it was equally memorable — and moving.

Seeing the father and daughter enjoying the day together “was such a beautiful thing,” said Julie Wright. Sharing the experience with them “has done more for my husband and I than we could have imagined.”

Others who offered adventure thought the same way, including Vickie Quinn.

Quinn and her family owned a home in Coronado for 25 years, and although she no longer lives there, she is still a member of the Coronado Happenings Facebook group. Stumbling on Mitchell-Delmotte’s post, she replied, “If you take him to Las Vegas, I can arrange a UFC fight.”

Quinn’s son is an executive at the Ultimate Fighting Championship and offering the tickets was his idea, she said.

Mitchell-Delmotte said her father was thrilled. So on December 11, the two traveled to Las Vegas to watch a match and spend the night.

An unexpected result of Mitchell-Delmotte’s initial Facebook plea was the many new friends she made online who have offered her constant comfort and support.

“It was the light in all of this,” she said.

She said her father was also very touched. He said the offers he received from strangers showed “the spirit of humanity”.

While they all wanted to go through with their offers, Mitchell-Delmotte said the timing wasn’t always right, and her father grew more and more tired as the December days wore on. But the offers themselves meant more to them than the experiences.

“It was the stretching. That’s what mattered,” Mitchell said. “Especially from people who don’t know me.”

Jeremy Cooke, a local teacher and violinist, was one of those people. Upon seeing Mitchell-Delmotte’s post, he offered to give a private performance. He made it a point to learn some of Mitchell’s favorite music – including classics by The Beatles, Van Morrison and the Beach Boys.

“I was hoping to give him and the family a break and a boost,” Cooke said. “I was happy to be a part of it.”

Mitchell was born on November 15, 1948 in Bremerton, Washington.

“Father said recently, ‘We are what we leave behind,'” Mitchell-Delmotte recalled. “And he leaves a very strong legacy.”

That legacy spanned nearly a dozen years as Dean of Students at Chula Vista High and nearly 20 years as Principal of Francis Parker. He believed that students should have a strong say in school governance and adopted a motto – “Doing the right thing” – to shape their values.

“I think that we often don’t expect enough of our young people,” he once wrote in the Parker newsletter. “In our zeal to protect them, we often underestimate their ability to thrive in seemingly adverse conditions.”

He also believed in being present, rarely missing a sporting event or student musical performance, notepad in hand to jot down things he saw and heard.

“His authenticity, kindness, soft laugh, warm smile and of course his yellow legal pad defined who he was and how he led,” Francis Parker Principal, Kevin Yaley, wrote in a note to the school community. “Patrick listened first, spoke with his head and heart, acted sensibly and cared deeply about you, not because of who you were or your position, but simply because you were you.”

Mitchell has been an avid traveler since childhood. Mitchell’s travels included visits to ashrams in India and treks to Mount Everest base camp when he was 66 years old.

He was an avid reader of newspapers and magazines, regularly clipping articles and mailing them to relatives and friends.

“He always thought of other people in different ways, and I think they’ll always remember that,” his son Derek Mitchell said. “He kept meeting former students who would tell him that something he said or did had a huge impact on their lives.”

Page wrote this for the Washington Post. Wilkens, a UT writer, contributed.

Stressed out at university? Here are five essential readings on how to take better care of your mental health