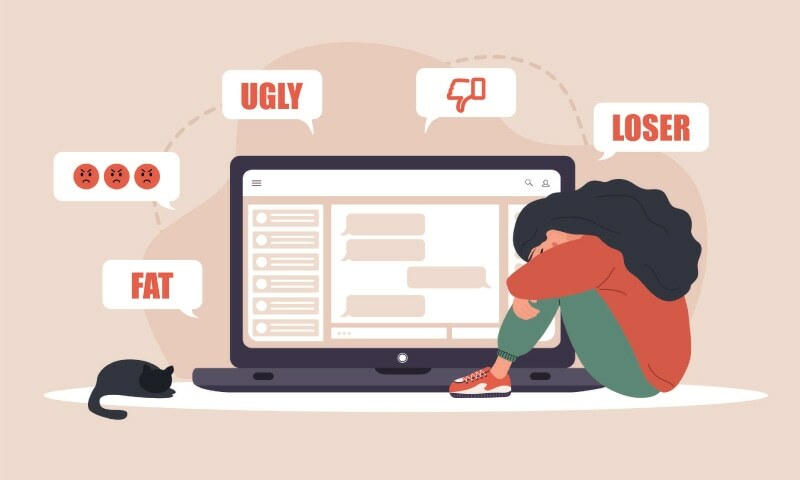 PSYCHOLOGY: THE PSYCHOLOGY OF TROLLING – Newspaper

When 21-year-old Hamza* posted a music video of himself, he literally put his life on the line.

Shy and reserved by nature, the aspiring young musician wanted to share his passion with the world. So he took to the internet to post a video showcasing his musical talent from the comfort of his room without having to meet in real life.

“I always thought music was my true calling,” says the 21-year-old. “However, I didn’t dare to play live in front of an audience because that would trigger my social anxiety. A friend suggested I post my music online instead.”

Still, sharing his secret passion was like revealing a part of his innermost self. “It took a lot of guts to put my video online,” he admits.

Why do trolls take pleasure in harassing and bullying strangers online, and what factors reinforce this harmful behavior?

And the world was not kind to him in return.

While his video received some positive feedback, it was mostly panned by random strangers. Reading the negative comments flooding his feed put Hamza in a dark place. “It got me into a depression,” he says. So much so that it prompted him to attempt suicide.

He now realizes that the opinions of people hiding behind spam accounts shouldn’t have bothered him, but at that moment they hurt his already low self-esteem. “If you’re being bullied in your real life, at least you can stand up to one person,” he explains. “However, on the internet, I didn’t know how to fight these nameless, faceless people.”

According to various surveys around the world, the number of cases of people suffering from mental health problems after being trolled or harassed online has increased. In internet jargon, trolling is a type of online bullying and is defined as aggressive and malicious behavior online. “Trolls” attempt to intentionally provoke, bully, and hurt others through inflammatory messages and posts.

Although both trolls and cyberbullyers share aggressive traits, cyberbullyers are not characteristically deceptive or randomly disruptive. On the contrary, research suggests that cyberbullies are often familiar to their victims in real life and the harassing behavior associated with cyberbullying is very direct and targeted. However, trolls do not usually seek vengeance against a specific individual, but rather troll people with large followings.

What makes a person spit hatred toward strangers?

Zehra*, 16, was diagnosed with depression. “I feel so miserable all the time and there’s nothing I can do to make it better,” she explains. “So if I can’t make myself feel better, the only thing I can control is making others feel just as miserable as I do. That’s why I troll people by creating fake profiles on Instagram. That gives me a feeling of satisfaction.”

according to dr Hadia Pasha, Associate Director of the Counseling Services and Wellness Office at Aga Khan University (AKU), a person may choose to defame, ridicule, or slander someone to express anger, seek revenge, gain attention, or deriving sadistic pleasure from seeing the effects of their actions on the victim.

“All of these situations are intentional, in which the abuser is either unable to feel empathy or chooses to ignore feelings of concern for the other, convincing himself that the victim deserves this treatment,” she says.

Research conducted by Australian cyberpsychology expert Evita March is helping to create a psychological profile of online trolls. Trolling has been strongly associated with the personality traits of the so-called Dark Tetrad. These include Machiavellianism (insensitive, manipulative, and deceptive traits), psychopathy (amoral and antisocial behavior), narcissism (a grandiose sense of self and a lack of empathy for others), and sadism (getting pleasure and satisfaction from pain or humiliation). from others).

Of the tetrad traits, psychopathy and sadism have been found to be more strongly correlated with internet trolling, as well as with cyberbullying, in previous studies. Men were more likely than women to troll online, and they performed significantly better on all Dark Tetrad traits.

Sohrab*, a 19-year-old boy, was brought to therapy by his parents because of temper tantrums and behavioral problems. One of the reasons he had behavior problems at home was that he wasn’t a popular kid at school. He later discovered that by posting mean comments under celebrity photos, he could get the social validation he craved from online strangers.

“The more malicious my comments are, the more engagement they get,” he says, “whether in the form of likes or comments. If I don’t write stuff like that, no one reads me. I don’t troll people because I hate them. Just so my comment doesn’t get lost among all the others. I just want to stand out.”

This is not surprising as low self-esteem has been found to be directly related to trolling. Research on loneliness and aggression suggests that loneliness represents a state of chronic frustration caused by social isolation and unmet needs. Therefore, it can express itself in maladaptive ways, such as B. Aggression towards others.

An important factor that sustains online trolling is anonymity, which leads to an “online disinhibition effect” — the tendency to experience a dramatic loosening of inhibitions and social restrictions on the Internet. This means that even people who would never bully anyone in real life could indulge in “trolling” others online. This disinhibiting effect encourages mob mentality and groupthink.

“The internet provides a convenient shield for many people,” explains Asha Bedar, a senior clinical psychologist, trainer, and researcher. In fact, research shows that the internet is a channel for people who don’t trust real life to express their dormant and repressed emotions.

“So it provided that platform for people who might not otherwise be as expressive,” says Bedar. “You get attention, an audience and a safe space – since nobody can harm you, nobody can see you, there is no accountability. That can be good too, but on the other hand it means there are very few filters and social etiquette when we express ourselves online.”

Bedar goes on to add that trolling is justified because the internet, as a public space, allows for toxic opinions. Offensive, inappropriate utterances are normalized to the point where we stop seeing them as problematic until they become dangerous. “The Internet has become a dumping ground for many emotional issues,” says the psychologist.

As our virtual lives spill over into our real ones, the impact of internet trolling isn’t limited to the virtual space either. Victims of trolling can experience a variety of psychological, social, and emotional problems in their real lives. Online trolling can worsen self-esteem, body image, and anxiety issues because it validates a person’s most negative beliefs about themselves.

The research report Safety Net: Cyberbullying’s Impact on Young People’s Mental Health shows that 60 per cent of young people in the UK have witnessed online bullying, but most do not take action. A 2018 Pew Research Center poll found that Instagram was reported as the social media platform on which the most people have experienced internet trolling. 42 percent of Instagram users have experienced harassment on the platform, according to the 2017 Annual Bullying Survey conducted by a youth organization in the UK.

Children under the age of 25 who are victims of cyberbullying are more than twice as likely to self-harm and suicidal. The perpetrators themselves are also at higher risk of developing suicidal thoughts and behaviors, according to a systematic review study led by Professor Ann John of Swansea University Medical School in collaboration with researchers from the Universities of Oxford and Birmingham.

One of the least talked about forms of cyberbullying is that certain individuals are continually ignored in virtual social groups, to the point that they feel insignificant and rejected by their peers.

“It’s a form of covert bullying that’s similar to real-life ostracism,” says Dr. Pasha from AKU. “While it does not involve direct objectionable behavior, it leaves deep scars on a person’s self-esteem, leading to low self-esteem, feelings of pain, loneliness and, in many cases, depression.”

According to L1ght, an organization that monitors online harassment and hate speech, the amount of internet trolling/hate speech among teenagers and children has increased by 70 percent from December 2019 to the end of 2020 since the Covid lockdowns began. This can be attributed to pandemic-related factors such as prolonged isolation, pent-up frustration with circumstances beyond our control, and the socio-economic impact of the pandemic. All of this has led to an overall increase in stress levels and a decline in mental health, which vitriol trolls towards strangers online.

Victims of internet trolling and harassment in Pakistan can turn to a variety of resources. The Federal Investigation Agency (FIA) Cybercrime Wing receives complaints directly and takes legal action against cyberbullies and harassment. The Digital Rights Foundation also has a toll-free and confidential Cyber ​​Harassment Helpline that provides legal advice, digital security support, psychological counseling, and a referral system for victims of online harassment.

The author is a clinical psychologist and freelance journalist. She can be reached at [email protected]