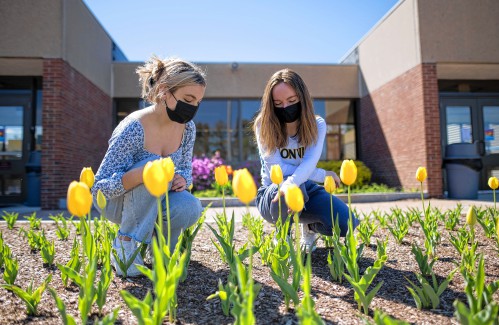 “I’ve struggled with my mental health for a while now, and so have a lot of people in my life,” Boisvert said. “It’s always the most amazing, beautiful souls struggling with mental illness and it’s never fair, it’s never a choice – it’s just the way it is. And what we can do as individuals is support one another and make the world a safe, loving place for all people who are struggling.”

A recently published study by the Centers for Disease Control Noting that mental health problems among adolescents have been exacerbated by the COVID-19 pandemic; Of the teens surveyed, 44.2 percent reported “persistent feelings of sadness or hopelessness,” 19.9 percent had considered attempting suicide, and 9.0 percent had actually attempted suicide.

“We lose far too many incredible people to suicide,” Boisvert said, “and anything we can do to spread awareness, to let people know how worth living and that they will never be alone is a big step towards better mental health awareness for the future.”

In its third year, Break the Silence expects to surpass $10,000 in funds raised, all of which were donated to the American Foundation For Suicide Prevention, which is now an official sponsor of the event.

“Spreading awareness is so important,” Boisvert said, “and breaking the stigma that’s so strong around mental illness is a tall order, but we can do it with the help of our community and anyone willing to getting involved and doing something to make the world a better place.”

The race will take place on Saturday 22nd May on the ConVal track. Registration runs from 9 a.m. to 9:30 a.m.; The race is a voluntary donation and those who donate $20 will receive a free t-shirt.