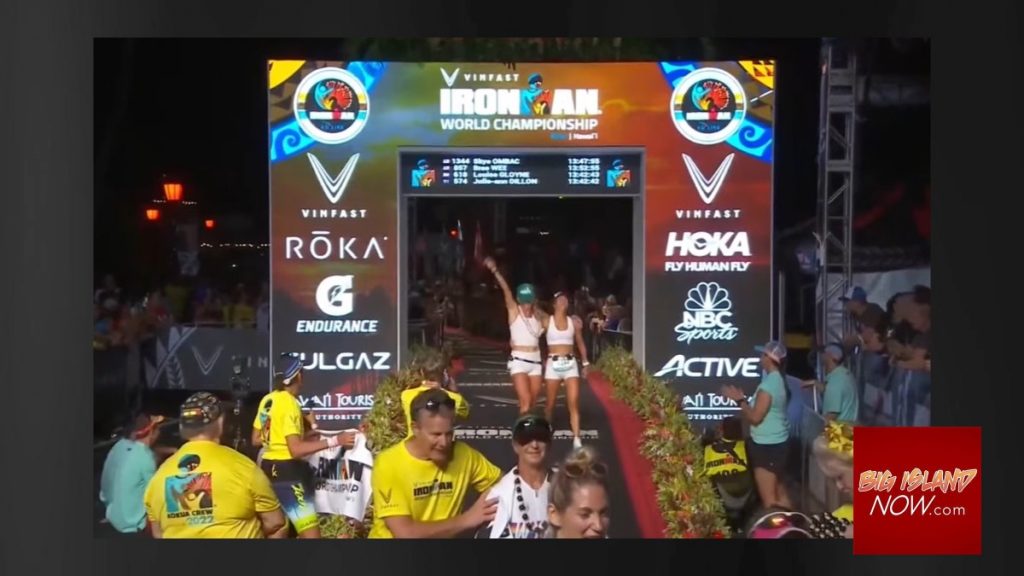 “I’ll Wait for You”: Skye Ombac and Bree Wee from Hilo cross the finish line together at Ironman: Big Island Now

What they started together, they finished together.

Kahakai Elementary School teachers Skye Ombac and Bree Wee, who began training for the Ironman World Championship two years ago, crossed the finish line at 8:32 p.m. Thursday with their arms raised to the scream.

The triathlon began early Thursday morning with the 2.4-mile swim at Kailua Bay. A 112-mile bike ride and a 26.2-mile run followed.

Ombac, 26, and Wee, 42, who started at different times due to their ages, were separated for most of the race until they found each other on the run. Ombac was at mile 2 or 3 and Wee at mile 7.

“She told me her foot was bothering her and she told me she’ll wait for me,” Ombac told Big Island Now on Friday. “I knew she ran/walked, but I ran/walked too. Just knowing that she was ahead and we would finish together made it even more special.”

Wee said she cried during the run and every time she saw Ombac she promised, “I’m waiting for you, hurry up!”

Wee waited for Ombac at the end of Palani Road for 40 minutes. As they ran the last mile together, Wee said it was over in no time.

“She basically gave up her day and goals to deal with me,” Ombac said. “It was her last Ironman and my first.”

As they ran together, the two teachers at Kahakai Elementary talked. Ombac said Bree told her she forgot why they started this journey. They started training for the Ironman because the younger Ombac wanted a training partner.

“We started this together and we finished it together,” Ombac said.

Wee, a retired professional athlete and former Ironman division winner, said she started training for the triathlon because Ombac asked her to. Over the course of two years, the two did every workout together.

As the race approached, Wee began to formulate her own racing goals.

“When the day actually came, I couldn’t achieve those goals at all,” Wee told Big Island Now. “I ended up in medicine for an hour and six minutes. My ankle buckled. It was so painful that I could hardly get off the bike.”

Wee said the doctors gave her a full physical therapy session: “They knew I didn’t want to stop.”

Wee said the injury was a blessing in disguise, adding that the race wasn’t about her, it was about being there for Ombac.

“I wouldn’t have raced without Skye,” she said. “It really is time to do it. The moment I did it about myself, it went wrong. It’s no longer about personal goals; it’s about helping the next generation.”

Ombac said her main goal for the race is to be happy, adding she didn’t want to cry unless they were tears of joy.

Ombac began to feel the fatigue of the race when she had 10 to 20 miles left on the bike alone.

Still, Ombac said she was able to cheer herself up and changed her tune to view the last dozen miles as training.

“It’s been a long day, but a good day,” said Ombac. “I’m very sunburned. From now on I look forward to some rest and recovery.”

As she drinks, Ombac looks forward to watching the men’s race from the sidelines with Wee and her other Ironman sisters, who have been training with the pair along the way.

It’s too early for Ombac to think about next year’s Ironman, but for Wee triathlon is officially done. Her hope is that she taught Ombac and her training mates to never quit, no matter what.

“Had my mother not identified my symptoms…”