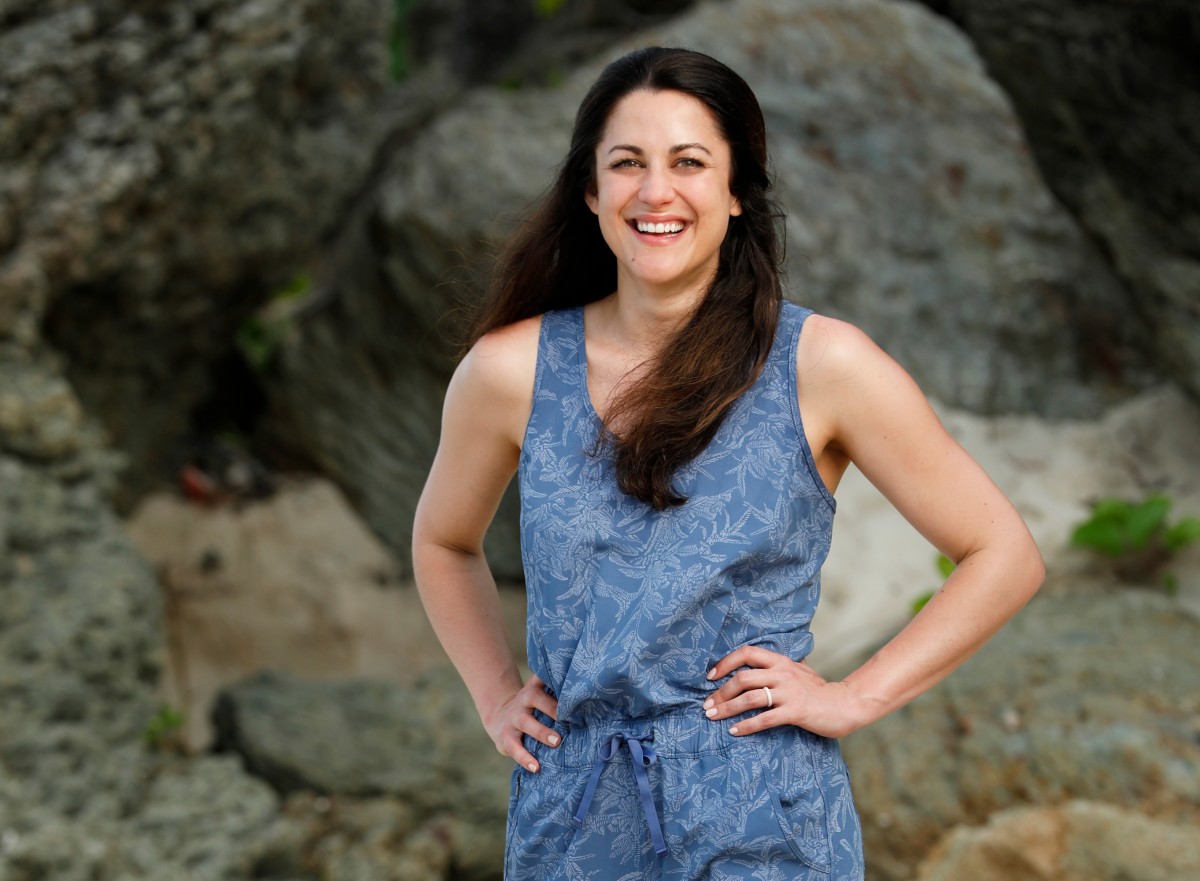 Eli Scott fell in love survivor after a friend in grad school compared her to Michele Fitzgerald. The 31-year-old is also hoping for similar success in her work as a clinical psychologist. She specializes in working with veterans on PTSD and believes her liaison skills will get her through the 27-day battle she will embark on. And while she knows she’s hiding a surprising disorganization, she plans to cover it up by becoming the next “Advantage Queen.”

Read on for my interview with Elie, and keep checking back to Parade.com each day for interviews with this season’s contestants and other tidbits. survivor 43 Premieres September 21 with a special two-hour premiere on CBS.

Interview with Elie from survivor 43

Why are you here? survivor?
I started my journey of applying at survivor I thought I just wanted to come and be on the show because I’m obsessed with it. I’m a super fan. But throughout the audition process, I did a lot of self-reflection and realized that I really had some things to prove to myself. Ever since I was young, I have had many self-doubts about my abilities. And I think I wanted to prove to myself that I could get out of my comfort zone and do something different. Because of my job and family system, I have always been in a role of serving other people. And so this is a chance for me to focus on myself for the first time and put myself first.

What’s your story with survivor?
I started looking first survivor when I was young, along with the rest of America, and then kind of fell off for a while. But then someone told me when I was in grad school, “You have to be careful survivor. I think it’s your thing.” And they told me I reminded them of Michele Fitzgerald. So I started watching it again to no avail. I said, “I want to see this person who reminds someone of me.” And in the end, she won the season! So I was like, “Well damn, maybe I was made for this.” And I just got totally obsessed. So I watched every season and every episode at least twice. I’ve watched some seasons three times, some seasons even four times, so to say I’m a super fan would be an understatement.

give me one survivor Winner and one non-winner who you identify with the most.
I identify a lot with Nick Wilson as a winner. I really appreciated that he opened up about addiction and his family during his season and that his mother died from it. I have it in my family too, and my sister actually died from it. Seeing things like that on a competitive TV show, but also about personal growth and this personal journey, has been very important to me in my life.

Also, I think his abilities are only underestimated from a playing point of view. People didn’t immediately see him as a strategic threat. I think maybe they thought he was looking for idols, so he had a target on his back at first. But he somehow got around that and formed really deep connections with people who outlasted him throughout the game. And I think I’ll be able to play similarly.

In terms of a non-winner, I think Cirie Fields is the best that never wins the game. She is fantastic. And I also think that I am very similar to her. she cares; she is a nurse. So she has a service job similar to mine. And it’s a massive strategic threat, but I think sometimes it’s underestimated. Sometimes people might pay tribute to a flashy or more outspoken player like Parvati when she was just as much at the forefront of a big move as Erik gave up his idol in Micronesia. So I think I would play a lot like Cirie too.

What is your favorite moment in survivor Story?
I have so many favorite moments from the history of survivor. I think the ones I just mentioned where Erik gave up on his idol and the amazing Black Widow Brigade was able to orchestrate that. Everyone played their part so perfectly. It was a real team moment with everyone really orchestrating this amazing blindside. But I also love quirky, funny moments. I was only reminded of one today where Billy confessed his love to Candice [on Cook Islands]. And it was super awkward just to think about us sitting here watching each other. We’re not allowed to talk to each other before the game. I think about how embarrassing that must have been. (laughs.) But also just a really funny, beautiful moment. That’s what came to my mind today.

What life experience do you think prepared you best for the game?
I think my job prepared me a lot for this game. My work is very complex. I work with Veterans who suffer from Post Traumatic Stress Disorder. You never know what you’re going to get in a session. You may all have PTSD, but it’s different for each person who experiences it. And so I have to think about my feet quickly. I need to be able to bond deeply with people right away in the first session you meet them. You say, “Hi, I’m Ellie. Now tell me about the worst day of your life. OK, go.”

And of course it doesn’t really happen that way. But essentially, they need to be able to trust you enough to tell you those really important and difficult things. Of course, everyone approaches it a little differently. We play a game. It’s not like a therapy session. But at the same time there is this similar question: “Who can I trust? Can I really rely on this person? Can I really trust this person with my secrets or these things about myself that I don’t want to tell everyone? ?” And so I think there’s a parallel there. And I think my natural ability and work life will help me a lot with that.

What excites you most about this new era of survivor?
I’m so excited about the fast pace of it all. I’m a very fast-moving person. I don’t like just sitting around doing nothing. And I think the “go go go” nature of where you’re basically every other day at Tribal, I think that’s going to play into my hand. If I’m given too much time to overthink things, I will. And so I actually think this fast-paced momentum will carry me through some things that I might have had my doubts about myself. But I think I can move fast with the game. And that will play to my strengths.

What do you think people will perceive you as?
That’s a good question. I think I’m always surprised to hear that people see me as a very easygoing person. I’ve been described as being well organized at work. But what they don’t realize is that the organizational structure I’ve built for myself is because I’m very disorganized on the inside. I’m kind of messy and everywhere. And if this is anything like my real life in terms of how people perceive me right off the bat, I think I kind of look like, ‘Yeah, I got it together. I am fine. ” But deep down, I’m going to freak out with the others. And so it’ll be interesting to see if that’s how I’m perceived in the game early on. And if it is, I think they’ll be pretty quick to say, ‘Okay, no , she’s just as bad as everyone else.”

What type of player are you looking for in an alliance?
I think a lot of times people are drawn to me when they’re maybe a little quieter or maybe they feel a connection to someone who’s more likely to take on a leadership role. I usually take on that role in relationships. I will be the link between people who might not otherwise be connected. And so I’m looking for people who want that from a partner.

Essentially, I want to work with people who want me. I don’t want to be expendable to people or just a number. I want to be someone who feels necessary as a partner to play the game. So that’s my main goal right off the bat. But to be honest, my job is to connect with people who are very different from me. And so I truly believe that I can form a friendship or a deep, meaningful relationship with anyone. You just have to want to have a friendship or relationship with me.

How eager will you be to seek out in-game advantages?
I would like to be a benefit queen! I think Drea from season 42 is just a goddess of them all. I’m so impressed with her and her ability to find all these things. But I say “skill” because it works really hard. I know luck is involved. But you don’t find idols and advantages if you don’t look. I want to search and search as much as possible without attracting attention. I want to look for idols. I know you have to hunt them down if you want them and I definitely will.

What did you tell yourself that you wouldn’t do in this game?
One thing I said to myself, I wouldn’t back down from a food challenge. I think it would really take a lot for me to do something like that. I mean, possibly in a situation where I needed to prove I was with a group of people – maybe if we all had to step back for rice and win some respect – I could do that. But if it’s like, “You’re allowed to eat during this challenge if you leave the block,” I said to myself, I won’t. I hope I have enough courage to stay another day, compete and starve.

Next, watch our interview with survivor 42 Winner Maryanne Oketch.