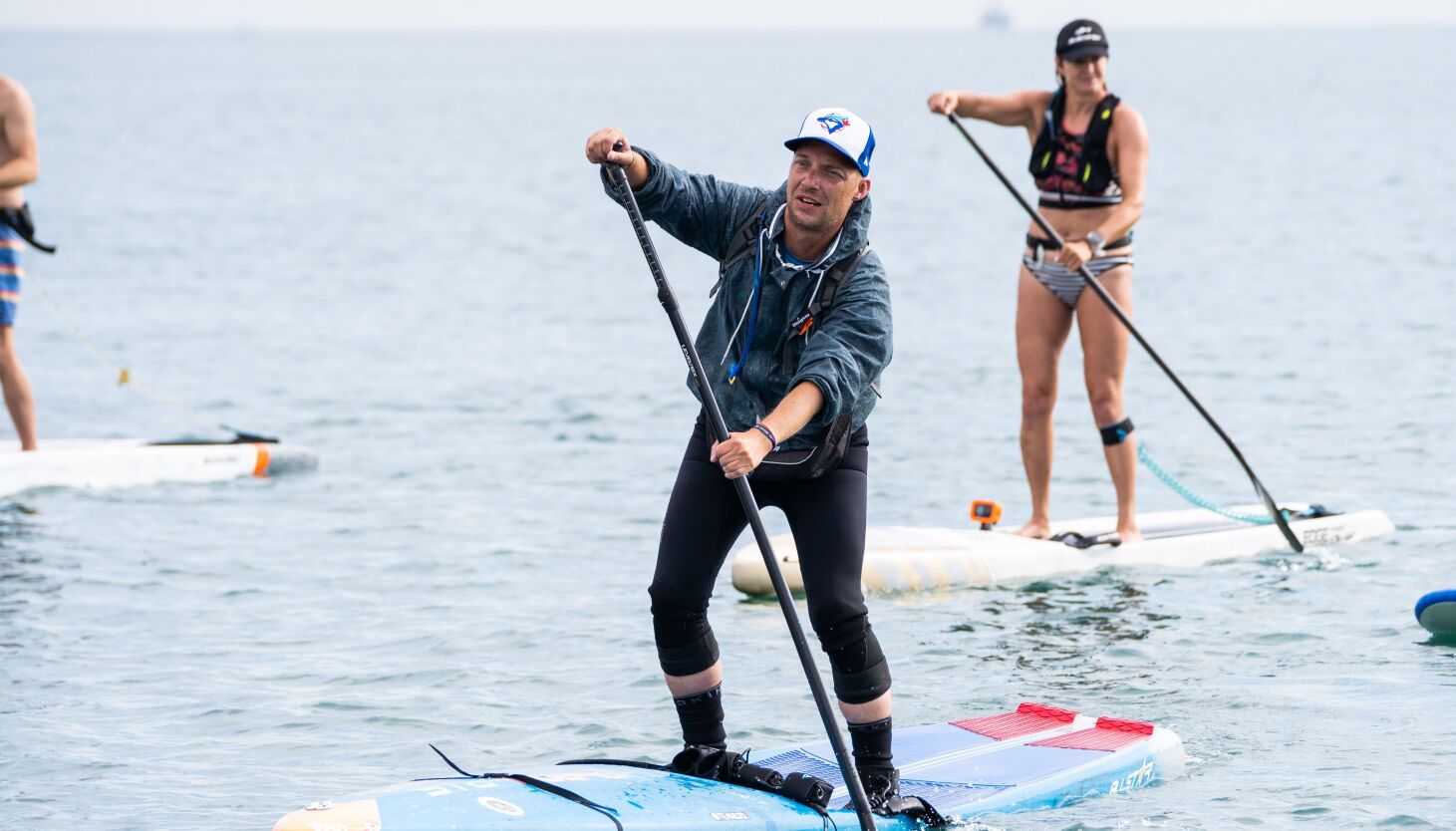 Paddling in the dark of night doesn’t get any less scary the more you do it.

Mike Shoreman can attest to that.

The skyline and the tallest buildings in the city served as a beacon.

Protein shakes and a squirt of Grape Kool-Aid every 30 minutes fueled him. And a support team in a nearby motorboat kept us company.

A group of local stand-up paddleboard enthusiasts paddled out to meet Shoreman, cheer him on and guide him ashore. Officers on a Chicago Police Department naval boat did the same.

He fell into the arms of his friend and support team member Liana Neumann. Then he sat down on the sand, removed the waterproof bags from his feet and removed his socks.

His plans for the rest of the day: “A shower and deep dish pizza.”

Four years ago, Shoreman was diagnosed with Ramsay Hunt Syndrome, a rare condition caused by shingles that has resulted in facial paralysis, impaired balance, loss of vision, taste, speech, mobility and hearing.

Canadian Shoreman had to relearn how to walk and was unable to continue his paddleboard business in Toronto.

“I have closed. I haven’t spoken to anyone. People wrote to me and I just didn’t answer. I didn’t want to leave my house. My face collapsed. I had to move home to my parents for care and I would go to the grocery store with a cane and hide my face because I didn’t want anyone to look at me,” he said.

“My parents were adamant that I go and stay in a mental health facility and that gave me the tools I needed and put me on the path to wellness and I realized I didn’t want kids to ever be feel like me,” he said.

“Mental health is anxiety and stress. Everyone faces it. There is still a stigma preventing people from being comfortable talking about it. People are embarrassed and if you don’t talk about it, it becomes a bigger problem.”

Shoreman works with Jack.org to raise money to implement mental health programs in schools in Canada. He is also an ambassador for several groups in the United States dedicated to promoting mental health.

Crossing the Great Lakes was not easy.

Shoreman, who works as an inspirational speaker, estimates his body has recovered 80% of the damage caused by Ramsay Hunt syndrome, but problems with balance, vision and facial paralysis persist.

Paramedics dragged him off shore after he crossed Lake Huron because badly cut and cracked feet made walking too painful.

To while away the time in the open water, Shoreman constantly chats and jokes with his support crew.

A game they play: Assign each one a stable animal that seems appropriate.

Shoreman was declared a goat, a nod to the Greatest Of All Time acronym and the bleating noise he used to make when he disapproved of something — like the taste of grape Kool-Aid.

Shoreman, who made his first crossing in May, will embark on the final leg of his journey on August 10 when he begins paddling across Lake Ontario.

“Mr. Morale & the Big Steppers” is a cathartic therapy session – The Cavalier Daily