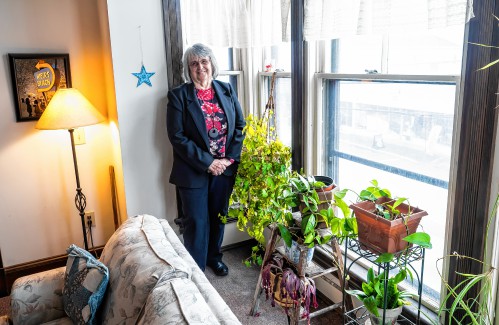 Patricia Tucker started her addiction care career late, but is making up for lost time with a busy private practice and roles in several community organizations.

Thirty years after enrolling in school at the age of 49, Tucker is a prominent member of the New Hampshire recovery community and has no plans to retire anytime soon.

“I have to retire at some point, but not today,” she said. “It’s not for everyone, but if you like it then it’s really a great place.”

For most of her career, Tucker has worked in administrative roles at various doctor’s offices and hospitals.

After her family grew up, she decided to go back to school and study something she believed would have a real impact in her community: addiction recovery.

“I’ve been with a lot of people who were in recovery and I saw how much their lives changed as they recovered,” she said. “I just wanted to support this process.”

Tucker graduated and began her career with the state’s Multiple Offender Program, a treatment program for people convicted of drug offenses that has since been phased out. She later joined the Drugs Unit at Concord Hospital as a counselor.

Eventually she opened her own practice in Tilton, where she sees about fifteen patients a week.

Tucker’s unwavering commitment to her community has inspired many, including her family.

“She’s always willing to help, put in the extra time. If anyone is in need, she’s out there looking for clothes or baby food donations,” said Ashley Tanner, Tucker’s granddaughter. “Where does she get all this energy from?”

Throughout her years, Tucker has seen several positive trends in the recovery world. Other resources are available, such as convalescent homes and peer support programs. There’s also been a notable decrease in the stigma associated with addiction, she said.

Tucker’s job is emotionally challenging at times, but she said it’s worth it when she feels like she can bring hope to her clients.

“Sometimes people with substance use disorders don’t have much hope,” she said. “What I’ve liked over the years is giving someone hope that their life can be different.”

She said one of the most important parts of her job is mentoring younger counselors who want to make a career out of drug recovery. Michelle Lennon, the general manager of Archways, formerly known as the Greater Tilton Area Family Resource Center, said Tucker is always available to assist providers in the area.

Other counselors frequently call Tucker to discuss issues, ethical dilemmas, and losses in their personal lives.

“She always made herself available,” Lennon said. “When we’ve had casualties, which are pretty devastating, she comes right over.”

Tucker was involved in building Archways from the beginning and served on the board of directors for many years, Lennon said. She has been a staunch advocate for restoration resources in local community meetings.

The Psychology of the Metaverse in Our Universe, by Dalia Abi Mosleh – Campaign Middle East