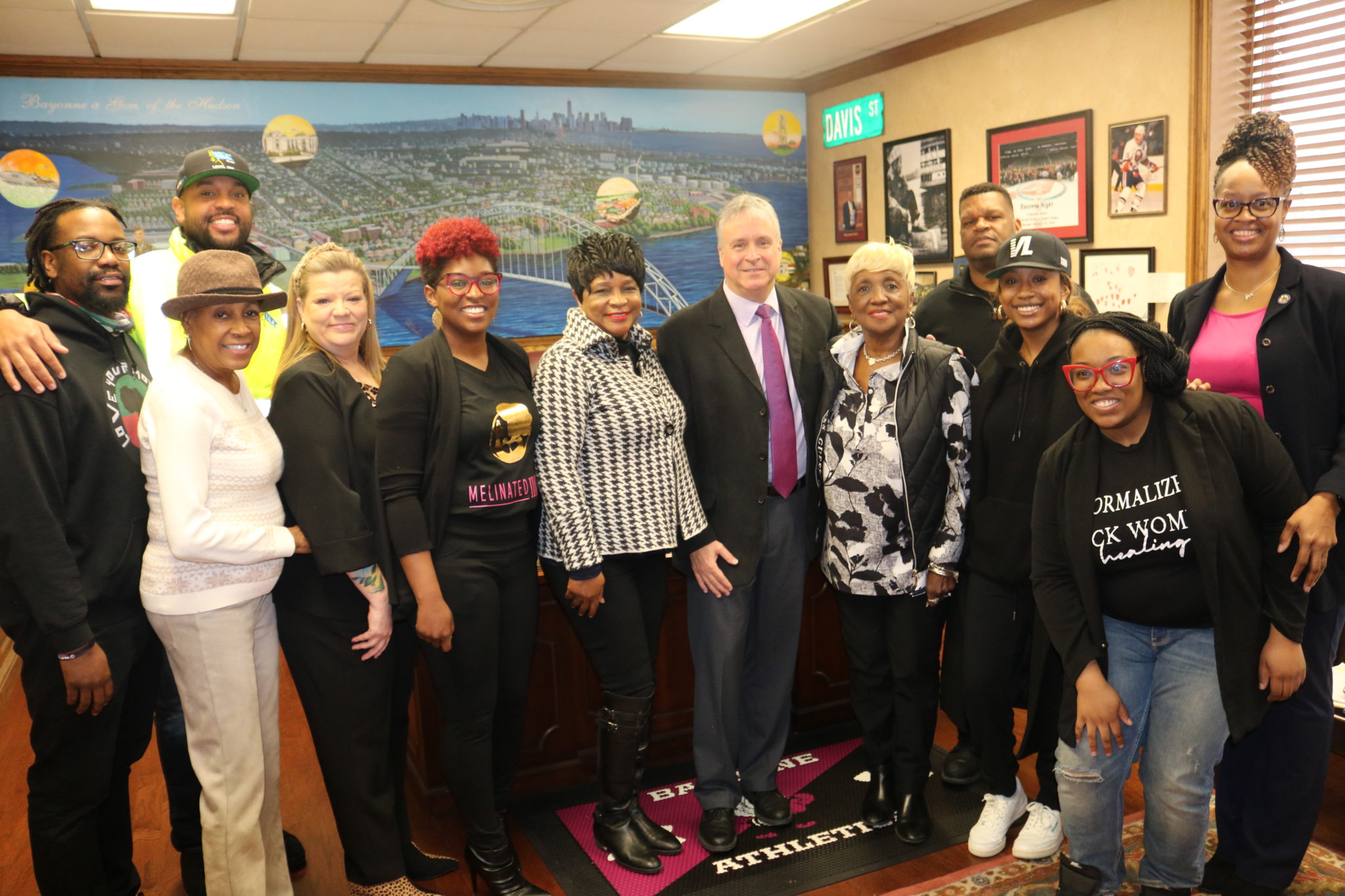 Officials and parishioners met at City Hall on March 12. Photos by Daniel Israel.

State and local officials are reaching out to community groups about domestic violence.

Camille High of Black in Bayonne was one of many community leaders at the meeting with officials.

Officials and parishioners met at City Hall on March 12. Photos by Daniel Israel.

State and local officials are reaching out to community groups about domestic violence.

Camille High of Black in Bayonne was one of many community leaders at the meeting with officials.

After the death of Mely Vanessa Tafoya Mendoza at the hands of her husband, Black in Bayonne called for stronger social services, particularly regarding domestic violence. Now Bayonne has set up a domestic violence and mental health task force, the result of an emergency meeting held by officials with community leaders on March 12.

Davis said the meeting was in response to the recent death of Tafoya Mendoza, as well as the March 12 suicide of 22-year Bayonne Fire Department veteran Otto Weber.

“One of the biggest issues we face right now is domestic violence and mental health,” Davis said, noting that he underscored the issue in his State of the City address. “At this point, they go hand in hand. My take on this, having been a police officer for 28 years, is that this is a by-product of COVID-19.”

While domestic violence and mental illness have always been issues, Davis said they have become more common amid the COVID-19 pandemic.

“For two years, we basically told people to stay home and not go out, not go to work, not socialize,” Davis said. “Mentally it destroyed a lot of people.”

Davis said these issues are epitomized by the recent tragedies of Tafoya Mendoza and Weber. He said he has been working with Bayonne Public Health Nurse Suzanne Cavanaugh over the past few months to prepare for an increase in domestic violence or mental health issues due to COVID-19. Although this is an election year, Davis is trying to take a long-term approach to the problem.

Davis acknowledged that domestic violence was a problem before COVID-19, but the task force will continue to work after the pandemic subsides. He said pressure on lawmakers must be kept up to keep emergency funding going to solve the problem.

“Usually the funding is there because we have an emergency. The moment they let go of the emergency, all of the funding goes away,” Davis said. “What we need to do is get the help of our state legislators and even yell at our federal legislators to say, ‘Don’t walk away from this just because COVID is over.’ We cannot just leave behind and move forward. We need to fix the problems caused by COVID. It’s not just health concerns, mental health issues, and domestic violence issues. The biggest increase in crime in Bayonne right now is domestic violence… Serious assaults on the rise… In the last two years we have seen an increase in serious assaults. When I had them investigate why, it turned out to be domestic violence… Serious assaults were up even as other crimes were down.”

Davis said the problem needs to be addressed now, not when it’s piling up and becoming a bigger problem. He said the community can now help him with that by supporting his efforts and those of Bayonne lawmakers and the task force.

Cunningham said that while she had a focus on mental illness in the Senate, she wanted to include domestic violence in the community.

Cunningham said when she’s in Trenton, she’ll see if she can expand a bill that’s in the works in the Senate to include not only mental illness but also domestic violence.

“That will be a start to ensure there is a certain amount of money available on a regular basis,” Cunningham said. “I’m going to make it part of my budget,” Davis said.

McKnight said she co-sponsored legislation previously signed into law by Gov. Phil Murphy designating the third week of March as “Domestic Violence Services Week” to raise awareness of the resources available to help victims of domestic violence and their victims Familys.

She added that she has been working with the New Jersey Coalition to End Domestic Violence on legislation to raise awareness of these services March 20-26, with a panel later this year on the issue.

Sampson said the meeting is about letting the community do the work, noting that Davis has worked to address domestic violence. He added that he will do his part in the assembly to support the task force.

During the discussion between officials and community leaders, High suggested using the Women Rising hotlines at 201-333-5700 and Sarah’s Daughters at 732-318-4116 for their services or even an educational program through a partnership between the Board of Education and the City. Adams said the program can be adapted to any grade level to give presentations aimed at preventing domestic violence. Reels said the most important part is educating the public.

“At the end of the day, it’s not just women,” Callaway said.

“The same thing is happening in the LGBTQ+ community,” Adams said.

Davis agreed, adding that it’s important to include men because they’re reluctant to come forward.

“I have to do this now because COVID is coming to an end,” Davis said. “I need to put a task force together because this is never going away. Because that will always be an issue. Our goal is to educate people and make sure they aren’t afraid to speak up.”

Davis said he hopes the task force inspires the county to do the same and expand it to Hudson. Borders, High, and other members of the community groups were set to meet again soon within the next two weeks, for which Davis offered the Bayonne Community Museum on Broadway as a meeting place.

Most recently, High asked how the task force could help Tafoya Mendoza’s family in the near future, to which Davis suggested starting an online fundraiser that he could sponsor.

High later told Bayonne Community News: “The work must be in legislation. Not in talks, not in opinions, but in legislation. This week is a testament to the power of the voice of the people. The legislature and administration worked together this week to advance the needs of the people of Bayonne. Thank you City Council President Sharon Ashe-Nadrowski and Mayor Jimmy Davis for putting people ahead of politics.”

Last week, city Council President and mayoral candidate Sharon Ashe Nadrowski introduced a resolution to allocate $25,000 in US bailout funds to “Education, intervention and awareness programs to combat the problem of domestic violence.”

Black in Bayonne plans to support the resolution with a 6 p.m. candlelight vigil before attending the next Bayonne City Council meeting on March 16 at 7 p.m. at City Hall at 630 Avenue C.

For updates on this and other stories, visit www.hudsonreporter.com and follow us on Twitter @hudson_reporter. Daniel Israel can be reached at [email protected]

What can you expect at your first therapy appointment? – Chronicles of Times Square