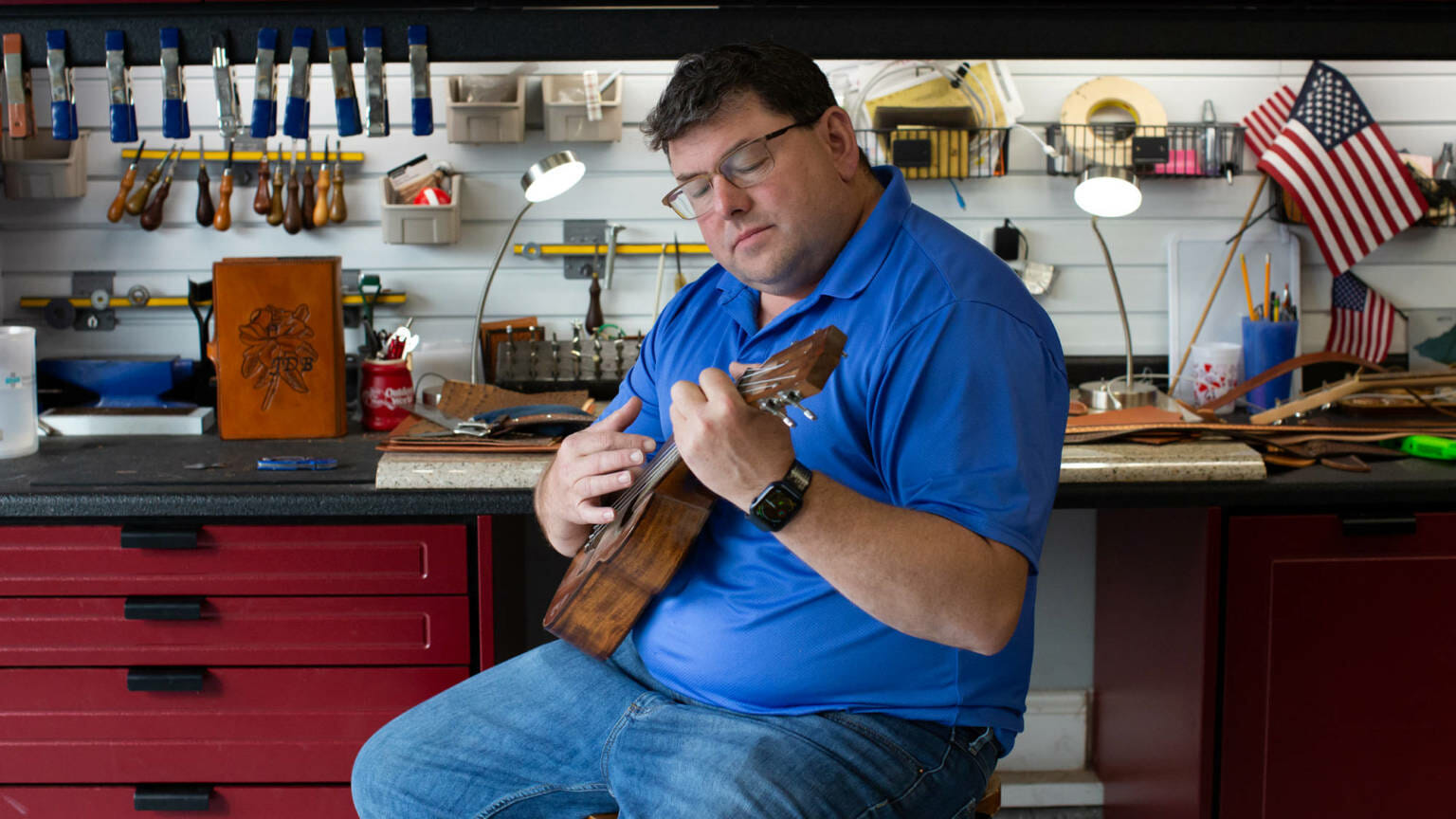 Art and music therapy seem to help with brain disorders. Scientists want to know why

As Michael Schneider’s anxiety and PTSD flare up, he picks up the ukulele he keeps next to his computer.

“I can’t actually play a song,” says Schneider, who suffered two serious brain injuries in nearly 22 years in the Marines. “But I can play chords to reduce my stress levels.”

It’s a technique Schneider learned through Creative Forces, an art therapy initiative sponsored by the National Endowment for the Arts in partnership with the Departments of Defense and Veterans Affairs.

It is also an example of how art therapies are increasingly being used to treat brain disorders such as PTSD, depression, Parkinson’s and Alzheimer’s.

But most of these treatments, which range from music to poetry to visual arts, have yet to undergo rigorous scientific testing. To change that, artists and brain researchers have launched an initiative called NeuroArts Blueprint.

The initiative is the result of a partnership between the Johns Hopkins International Arts + Mind Lab Center for Applied Neuroaesthetics and the Aspen Institute’s Health, Medicine and Society Program. His leadership includes soprano Renée Fleming, actress and playwright Anna Deavere Smith, and Dr.

One goal of the NeuroArts initiative is to measure how arts therapies change the brains of people like Schneider.

“I had a traumatic brain injury when I was involved in a helicopter accident aboard a US Navy ship,” he explains. That was in 2005.

Later that same year, he experienced sudden decompression—the aviator’s version of turns—while training to fly high. The result was like a stroke.

“I lost all feeling on the right side of my body,” he says.

Schneider recovered from both incidents. But they took their toll on his brain. And in 2014 he got serious problems.

“I had this progression of really bad seizures,” he says. “At one point I was having 20 to 40 seizures a day.”

He also developed symptoms of post-traumatic stress disorder known as PTSD and depression. Schneider went to Walter Reed National Military Medical Center in Bethesda for treatment. But he didn’t get any better.

“I had lost hope,” he says. “I didn’t really think I would make it through the next few years. My brain just shut down.”

At the time, military doctors referred Schneider to Rebecca Vaudreuil, a music therapist at Creative Forces and the Henry M. Jackson Foundation. From an early age, Vaudreuil learned something fascinating about the great Marine of Marquette, Michigan.

“He had a history in theatrical arts,” she says. “And so I could say there was some priming.”

Vaudreuil had Schneider play a few notes on a piano.

“I started humming the notes and she said, ‘You can sing,'” he recalls.

This led to many musical explorations, including the ukulele. It also helped Schneider talk about his struggles and gave him a way to reduce his seizures and relieve some of his anxiety and PTSD.

“Relearning music took away that fight-or-flight principle, that ingrained piece of my training,” he says. “It was able to open up all these new pathways through my brain.”

“We know that when we receive music, even when we listen to music, we activate several parts of the brain,” she says. And studies suggest this strengthens circuits in the brain that help repair damage.

There is also evidence that the brain changes in response to other art therapies such as dance, poetry, painting, sculpture and even leatherwork. But so far there haven’t been many scientific studies to prove it.

“We need to provide robust empirical data that demonstrates effectiveness,” says Nestler, co-chair of the Advisory Board of the NeuroArts initiative.

“It’s more difficult in some ways with music or art than with a new drug,” he says. “On the other hand, I think it’s very doable.”

For example, there are many anecdotal reports of Alzheimer’s patients who can no longer speak, but who begin to sing and become more interactive when listening to a familiar song.

“Now, in addition to the behavioral changes, you could identify higher levels of activity in circuits in the brain related to memory and emotions,” says Nestler.

Fleming, another co-chair of the advisory board, has actually seen the effect singing has on her own brain.

During a 2017 visit to the National Institutes of Health, she agreed to perform in an MRI scanner.

“They made me sing, imagine singing and speaking,” she says. “You probably would have guessed that singing would have the greatest effect on my brain, but that wasn’t the case. It imagined singing.”

For Fleming, the existence of something like the NeuroArts Blueprint represents a major and important shift in thinking since the early days of her career.

“I had terrible stage fright. I had somatic pain from the pressure to perform,” she says. But back then, doctors tended to dismiss symptoms that affected the mind-body connection.

That’s why Fleming now uses her performance tours in a targeted manner to meet with brain researchers and art therapists.

“I saw a music therapist working with a gentleman who had a stroke and couldn’t speak,” she says. “And within one singing session, he could communicate.”

To understand why this happened, neuroscientists and artists must create a new field: neuroart.

“We realized how our two worlds can merge in this really interesting way,” he says.

But Nestler says that even with good scientific evidence, arts therapies will likely face obstacles to gaining widespread acceptance and support.

“No one asks whether they should pay $100,000 or more for spinal surgery,” he says. But reporting music therapy for a brain condition, he says, “is going to be a big fight.”

The ASU psychology professor loves to make a difference