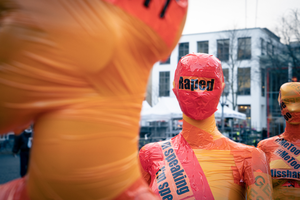 After conducting three online survey studies involving a total of 2149 participants, the researchers at Eötvös Loránd University (Budapest, Hungary) conclude that people who have not been affected by rape, and neither have any of their close relatives, been the most likely to be affected believe in these myths. Therefore, they would more often blame the victim, excuse the perpetrator, and rationalize rape overall, accepting that the world is a just place where rape only happens to people who somehow deserve it. This was particularly true for ‘unsafe’ rape cases, ie cases where the scenario does not fit the stereotype.

While a stereotypical rape scenario – like the one discussed above – is generally condemned by society, the actual majority of rapes are not labeled as such. For example, cases in which the perpetrators are known to the victims, have no criminal record, or use means other than physical violence to coax them into sexual activity are often trivialized by shared beliefs such as, “If a girl behaves like a slut, eventually she’ll get in trouble” or “rape happens when a man’s sex drive gets out of hand”. As a result, victims of non-stereotyped rape are unlikely to receive support or understanding and ultimately fail to report the crime (on time) or take appropriate legal action.

“Unsupportive responses to rape survivors are not only a global public health problem, but also a human rights violation. The reason for the high perpetrator and latency rates is that sexual violence is a systematic problem that is related to the societal attitude towards rape. They also add that it is estimated that the actual number of rapes in Hungary is 415 times higher than the reported ones.

It turns out that acceptance of rape myths acts as a cognitive scheme, with people taking “short cuts” rather than interpreting certain information for themselves. As such, they might be prone to ignore new information that doesn’t align with their pre-existing beliefs and ideas, thereby reinforcing stereotypes. Along these lines, those “supporting rape myths are more likely to describe friendly behaviors of women as sexually teasing, less likely to suggest that rape survivors report the rape, and less likely to describe forced sex as rape.” Additionally, those who view rape as a sexual act rather than a violent act tend to downplay the seriousness of the rape.

On the other hand, people who have either been victims of rape or who have a close relationship with a victim are much less likely to accept these rape myths. While both groups are best placed to support rape survivors directly and play an important role in interventions aimed at reducing rape and sexual assault, this is particularly true for the latter.

The scientists recall that previous studies have shown that activities aimed at bringing about cultural and social change by countering existing misconceptions and stereotypes are most successful when they involve people who cannot be seen as immediate beneficiaries. Such an effect has already been seen in anti-sexism movements, which tended to be represented by men rather than women.

Disclaimer: AAAS and EurekAlert! are not responsible for the accuracy of the press releases published on EurekAlert! by contributing institutions or for the use of information about the EurekAlert system.

Where’s the biggest hole in the squad… now?